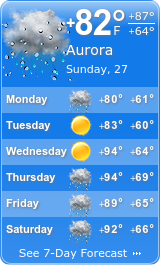 April 4, 2017, Rangeview Concert Choir attend the CHSAA Large group festival at Rock Canyon high school and revived a II or excellent for the amazing performance and sight reading. This was only the second time at this festival and have greatly improved from the last festival.

Aurora Sentinel profiles amazing student efforts by Social Justice Club to travel to DC to learn how they can make a difference. You can help them at SNAPRAISE - click here.

In December the Rangeview Choir held its annual winter concert. During this time they choose a Rangeview community member that has challenging times and raises money for their financial needs. This year we found out about Sarah. Sarah Manzanares is a senior at Rangeview.  Three weeks ago she had a bad back ache and decided to go to the doctor.  They found a tumor encasing her heart.  They can't operate until they shrink the tumor.  Because of the time for treatment lots of people are missing work and will continue to miss work to take her to appointments and be with her for what she needs.  She does have insurance, but her family is dealing with lots of co-pays. Sarah is in Rangeview Academy and hopes to one day become an Oncology nurse.

Thanks to the amazing outpouring of love we raised $1200 for Sarah and her family.

On November 21, 2016 the Girl Rising event took place at the PLCC and included all 9th grade girls. Click here for complete story.

November 22, 2016 was the Man Up event for all freshman boys. - Click here for complete story.

On November 5th, 2016, Rangeview Show Choirs set on their way to go compete at the Old West Show Choir Festival in Alliance, Nebraska. Being 2 out of 20 groups to perform, both were high crowd pleasers. Rhapsody, Rangeview's All-Women's Show Choir, won a silver with an empowering set with the songs "Pocketful of Sunshine," "Red," and "Lips Are Movin'." Chromatics, Rangeview's Mixed Show Choir, won a gold with an energized set that included the songs "Can't Stop the Feeling," "Just Like Fire," and "Don't Stop."